“He kind of sounded like he was shouting at you,” said one friend who listened to this recent interview. He was joking, but the observation speaks to the enthusiasm with which Ryan Jespersen approaches pretty much any topic he covers – including Alberta craft beer. I think it’s great.

Many thanks to him for having me on the show in early May to talk about my book, Tapping the West, and about some of the factors that went into making the province’s craft beer industry possible. And awesome.

Definitely something worth shouting about, I’d say.

I’m grateful for the interview, no matter what I might have said. (I can’t bring myself to go back and listen – something to do with the idea of having to listen to my own voice, perhaps.)

I’m very grateful to Canadian Beer News, an online voice for beer industry developments across the country, for sharing news of the upcoming release of my new book, Tapping the West.

The book officially launches May 5, and is available at local bookstores (like Audreys in Edmonton, which offers curbside pickup) and online at Amazon and Indigo.

With a book coming out, and no chance of a launch anytime soon thanks to the pandemic, I was asked by my publisher to pull back the curtain on what I was up to at home these days. Here’s the big reveal.

This blog post doesn’t have a lot to do with Tapping the West: How Alberta’s Craft Beer Industry Bubbled Out of an Economy Gone Flat (now available for pre-order!). Writing it, however, got me thinking about the potential for COVID-19 to teach us something about ourselves. If this thing doesn’t kill us, it might indeed make us stronger somehow.

And if the proof doesn’t turn up in the pudding, maybe it will in the homebrew.

As participants in the blanket exercise that was to come, we were told that we’d likely need the boxes of tissues being set out for us. It was a way of being told we weren’t ready to hear the things we were about to learn. Colonialism, our facilitator said, was “a brutal history.”

I’m ashamed to say that I really had no idea. This exercise helped me learn. Please read more at techlifetoday.ca.

My discovery of the true meaning of REST: Restricted Environmental Stimulation Therapy

Salt can hold a certain kind of salvation. All you have to do is dissolve 1,000 pounds of it in a shallow, 34-degree bath. And then you just lie down and drift.

I discovered this at Modern Gravity, a float facility in central Edmonton. Owners Matt Smith and Jamie Phillips hope to establish the practice as a recognized therapy for relieving clients of many of the stresses of modern life.

The challenge: relieve floating of its reputation for being, as the owners put it, “hippy woo-woo science.”

When I heard that a graduate of NAIT, the polytechnic where I’m a comms guy, was a professional wrestler, it was like a bell had rung. As a writer – and a former 10-year-old wrestling super-fan – this was the matchup I’d been waiting for.

The Gothic Knight, a.k.a. Edward Gatzky, finished a diploma in dietary technology in the 1980s before hitting the wrestling circuit, coming ever so close to a career in the WWE. But life had a few surprise moves of its own, and Gothic (as he’s called) ended up in settling down in Lethbridge, the area of the province he’s from, where he started Pure Power Wrestling.

On the eve of his retirement in fall 2016, I visited Gothic to talk about life in the square circle, what it meant to leave it behind, and his dream to bring wrestling back to its heyday in my youth, when the reality was that pro wrestling ruled.

Read the story at techlifetoday.ca. 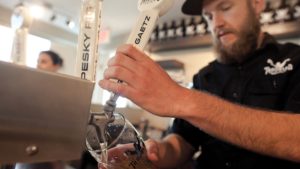 Since December 2013, when the provincial government lifted minimum production requirements for Alberta brewers, the local beer industry has been booming.

Join me on a short but sweet (and sometimes a little bitter – you know what hops can be like) tour through a small portion of what’s on tap across what’s becoming affectionately known as “Albeerta.”

For much of her life, Marni Panas was good at keeping a secret: that she was female but had been assigned male at birth. She lived in a small town where she says such things weren’t discussed, and during a time when there really wasn’t the language to do so anyway.

But as she became an adult, and a spouse and parent, she realized she could keep that secret no longer. She had to be who she was; that is, she needed to live what she considered an “authentic” life. So, in her 40s, she began the process of transitioning.

Today, Panas is known as one of Alberta’s, if not one of Canada’s, most vociferous and fearless advocates for transgender rights – and one of the key members of a group that helped protect those rights in provincial legislation.

While she’s accomplished much, but knows much remains to be done. For her, that’s the reward and price of living as true to herself as possible. Read the full story at techlifetoday.ca.